Want to try Starburst Slot? Everything you need to know to play! 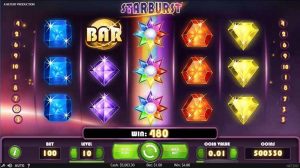 This is a game that recalls some traditional symbols of the slots, but placed in a very futuristic space theme. Between flashes of light, electrifying sounds and explosive words, Starburst Slot catapults you into deep space, full of special effects that are activated especially at times of big wins!

STARBURST is certainly among the best themed slots and we can not be surprised, given the masterpieces that have come out of the software house NetEnt: Gonzo’s Quest, Jumanji, Divine Fortune, Viking and many other slots 🎰 for all tastes. A simple slot and at the same time very adrenaline, which combines the passion for the classic VLT to a modern and linear graphics. The game mode is also straightforward and doesn’t feature any scatter symbols or multipliers, but NetEnt still found a way to make it interesting and fun!

Starburst slot features five reels and 10 win lines that pay in both directions. In most slots you have to line up the symbols from left to right, while with the Win Both Ways feature, Starburst slots offers players the chance to increase their winnings: an option that partly explains this slot’s success 🌟. The symbols of the slot are shiny colored gems, each with a different value. There are also two classic slot symbols that pay the highest payouts: the 7 and the BAR. Five BAR symbols or five 7’s will give players astronomical winnings! The most important symbol, however, is the multicolored star, which represents the Wilde symbol that replaces all other symbols on the reels: get ready for the star features, which we will explain in the next paragraph!

How much can you win?

Even though there are 10 paylines, Starburst slot wins can reach special heights. Not only does the Win Both Waysle feature double, but the prizes given by the special symbols multiply the winnings in an exciting way. Suffice it to say that the biggest win can be as high as 50,000 credits 💶! The symbol that gives the highest payouts is the BAR: the maximum payout is 250 times the stake! The other main symbol is the 7, which allows you to bring your winnings up to 120 times the stake, if 5 appear in one spin.

The gems on the other hand pay 25 to 60 times the stake. But the real rewards come with the Wild symbol: the rainbow star appearing on reels 2, 3 and 4 activates the respin, or Starburst Wild, feature. This feature expands the symbol across the entire reel and fixes it while the other reels spin. If a new Wild symbol appears, that reel will be locked as well, allowing the player to achieve very high potential winnings 🏅. You return to standard mode when no new Wild symbols appear on the reels. A maximum of 3 respins can be achieved.

Starburst slot is very satisfying thanks to the interesting Wild symbol and the Win Both Ways feature that increases the chances of winning 🏆. This is a slot that should definitely be tried and suitable for players even beginners, given the simplicity of the game mode. A slot between classic and modern, for a fun and relaxing journey at the same time. It certainly deserves at least a 7 and a half!