Book of Dead slots, everything you need to know to play!

We’ve tried the Book of Dead slots 🎰, here’s what you need to know!”

Book of Dead is an Egyptian-themed slot that is very popular among casino game enthusiasts. The slot is one of the flagship products of the software house Play’n GO, Swedish company leader in the field. Among the thematic slots is one of the most played, thanks to the exciting setting and realistic graphics. We have tried it and in this article we will tell you everything you need to know!

Laslot Book of Dead takes you on an adventure to discover ancient Egypt, in the company of explorer Rich Wilde. The character is clearly inspired by the archaeologist Indiana Jones, with the Fedora hat and the curious and adventurous spirit that drives him to penetrate into the mysteries of the pyramids to find the treasures.

The setting is a much-loved feature of this slot, and is also found in the game’s symbols: not only are the classic poker cards given an ancient twist, but also the other symbols of the Egyptian gods contribute to making this Egypt-themed slot exciting and unique. The animations are elaborate and the arabesque soundtrack 🌟 transports players on an exciting and suspenseful journey through time. You’ll find yourself anxiously awaiting the typical sound of the appearance of the symbol that gives the slot its name: the Book of the Dead!

Book of Dead slot features 5 reels and 10 paylines. The object of the game is to line up equal symbols on the paylines. Some symbols, especially the richest ones, also pay in pairs, which means a greater chance of winning 🏆! Let’s find out what Book of Dead slot symbols are! The ones with the lowest value are the poker card symbols from 9 to Ace, stylized as the figures of ancient Egypt. 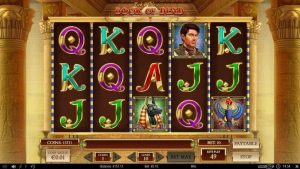 The richest symbols, on the other hand, are the Hawk, the god Anubis, Osiris and above all the slot’s protagonist, Rich Wilde! As for the special symbols, in the Book of Dead slot the book that gives its name to the slot is both as a Wild symbol and as a Scatter symbol, so it is valid as a wild that can replace all other symbols to get winning combinations, but in the event that they appear 3 together on the reels will give the player 10 free spins.

Book of Dead slot’s RTP is 96.2%, which is average. The volatility is high, which means that the slot offers significant value wins, although less frequent than other slots.

How much can you win?

In Book of Dead slot, each symbol has its own specific value. The playing card symbols pay only if they appear 3 to 5 times on the reels, while the deity symbols and Rich Wilde’s symbol also pay if they appear in pairs.The symbol values can be viewed by clicking on each of them. In particular, the pair of Hawk and Anubis symbols pay up to 750 coins for 5 identical symbols. A pair of Osiris symbols pays up to 2000 coins 🪙, while the best symbol, that of the explorer Rich Wilde, pays up to 5000 coins for 5 equal symbols.

And if these pharaonic figures don’t seem enough for you, the special feature of this slot will leave you stunned! Every time you get a winning combination, the winning amount can be doubled thanks to the “Gamble” feature, which allows you to bet your winnings to increase their value. It is not a function to abuse, but used in the right way and sparingly can give great satisfaction!

Laslot Book of Dead is undoubtedly one of the best Egypt-themed slots 🎰. The doubling feature, the animations and sounds make it absolutely unmissable for fans, especially those more experienced. Our vote is a fully deserved 9!